The history of any ancient cathedral must always be interesting, and that of Exeter is no exception, though “it supplies less of architectural history than those churches whose whole character has been altered over and over again.” A cathedral represents not only the spiritual, but the active, laborious, and artistic life of past generations. The bishop, too, was in many ways the head man of the province, and combined, not seldom, the varied qualities of priest, warrior, and statesman. The acts of such ecclesiastics were full of importance, not for their own city only, but often also for the whole nation. As men who had frequently travelled much and studied deeply, they summoned to their aid in the building and beautifying of their churches the most skilled artists end artificers of their time; so, with the story of the lives of the bishops of a diocese, the history of a cathedral’s building is inextricably woven. To be elevated to a bishopric generally meant to be put into possession of great wealth—when Veysey became bishop the revenues of the see of Exeter have, by some authors, been computed at £100,000; Canon Hingeston-Randolph puts them, with more reason and authority, at the sum of £30,000—and a large portion of this money was spent on works connected with the chief church of the diocese. It is not wonderful, therefore, this generosity being joined to marvellous skill and taste, that our old cathedrals are at once the despair and envy of the modern architect. And it is with a feeling of reverence that one recalls the history of those who built in the heart of each populous city “grey cliffs of lonely stone into the midst of sailing birds and silent air.” 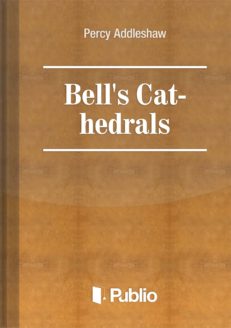