Essays on Literature and Psychology

This book is a window of time from 1963 to 1977, in which these essays flow trough. The author, who in 1956 escaped from the Soviet tanks that crushed his people’s freedom fight begins to look around a decade later in his New Word, brave or not, with an analytic eye and that is what we read now, a half a century later. And we may easily feel that, that half a century may never happened.
The author invites the lovers of Literature and Psychology to an interesting theoretical journey by this river of essays, to view the word from those years, in which we find some thoughts that are astonishingly relevant today. The reader’s task is taking into further consideration what became reality from those notions, how the science of Psychology developed and what about the messages of literary works. Are they still current?

„Essays on Literature and Psychology” értékelése elsőként Kilépés a válaszból 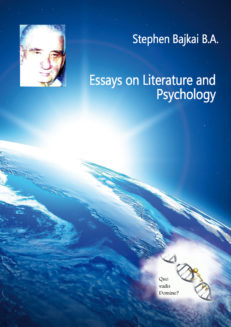